José Monje Cruz, Camarón de la Isla, is the character who best represents the city of San Fernando internationally, and for this reason, preserving the honor of the world flamenco myth, a route has been designed in his hometown that shows where he was born and grew up in his early years.

He was raised in the poor neighbourhood of Las Callejuelas, whose streets were an extension of the houses, a safe space where children would freely play and run around. This modest neighbourhood, of sailor tradition, is structured into slightly steep cobblestone parallel streets that descend from the Church of Our Lady of Carmen to the marshes and the salt marshes of Sancti Petri tributary.

Its inhabitants, mainly salt farmers, fishermen or seafood pickers lived in modest and simple houses. There were also old warehouses and storerooms, small workshops (ironworkers, dockside carpenters, rope makers,…) and “güichis”, bars in which the men would meet at the end of their working day.

The limestone facades of his native house hid a universe shared by six families. The house was made up of several rooms around a courtyard used by neighbours. They shared the common amenities situated in the courtyard: kitchen, well and latrine.

Today, the native house of Camarón tries to recreate a little known period of his childhood and youth, stages that influenced the formation of the person who would come to be a universal legend of flamenco.

Camarón heard the first saetas and fandangos as a newborn. His father, Juan Luis Monje Núñez, a fan of cante jondo, earned a living as an ironworker, a job well regarded by the traveller community. 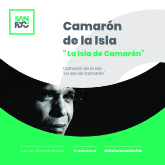 What are you looking for?

We use cookies on our website to give you the most relevant experience by remembering your preferences and repeat visits. By clicking “Accept All”, you consent to the use of ALL the cookies. However, you may visit "Cookie Settings" to provide a controlled consent.
Cookie SettingsAccept All
Manage consent

This website uses cookies to improve your experience while you navigate through the website. Out of these, the cookies that are categorized as necessary are stored on your browser as they are essential for the working of basic functionalities of the website. We also use third-party cookies that help us analyze and understand how you use this website. These cookies will be stored in your browser only with your consent. You also have the option to opt-out of these cookies. But opting out of some of these cookies may affect your browsing experience.
SAVE & ACCEPT
Font Resize
Contrast
Accessibility by WAH